The inhabitants of Skyros still hold on to their proud heritage. Their island sustained countless generations cultivating the soil and breeding endemic lifestock according to ancient traditions (cf. the article: Skyros - pastoral traditions).

The inherited style of their houses was strictly observed. It relates to the Cycladic Archipelago, but became indigenous. Settlements reflect the close coherence in this rural society; nighbourhoods still determine the community.

At weddings archaic kinships become apparent. And the equally bearing expression of orthodox ritual and festive performance - being both the celebrated highlights in a life cycle of enduring obligations. 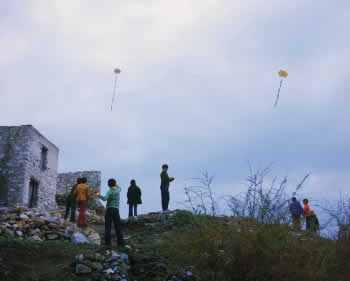 Skyros ways of life are directed inland; their aim is distinction. And yet: kites are universal being flown by kids in countries far beyond the horizon. But here these kites are flown on one particular day - its again a festive celebration in its own.