The archipelago of Skantzoura, Northern Sporades sank into oblivion, got lost in the people's consciousness - since the Monastery of Evangelistria was abandoned by the monks of the mother monastery, the I.M. Megisti Lavra on Agion Oros. 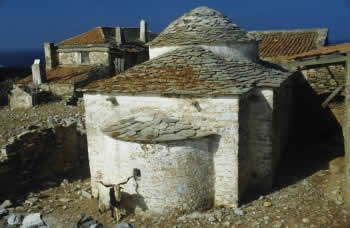 Still the buildings at the elevated center of the main island did not collapse, but after decades of total neglection and the constant invasion by free roaming domestic goats, they are in a derelict condition.

The last goat-keeper has left as well. He retired to Alonnisos, leaving behind his animals; there is nobody who looks after the church and houses. 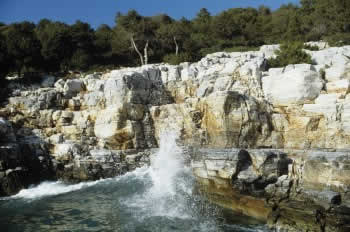 The physical character of this archipelago is quite distinct from that of the other Deserted Islands of the (outer) Northern Sporades. On Skantzoura gentle hills dominate the landscape. They are covered mostly by juniper woodlands. The same vegetation is predominant on the small islands of the Skyros archipelago further south - east, Skyropoúla and Kouloúri. 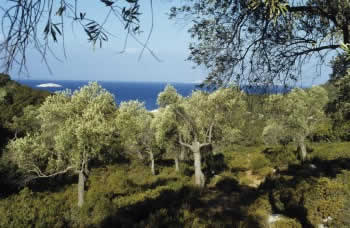 The formerly cultivated lands (Kampos and the vineyards next to the monastery) year after year loose more of their fertile soil. Nobody harvests the olives.

The seven small satellite islands belong to the Megisti Lavra as well: Kóraka, Prasoù (=Skandíli), Kyriáko, Strongylò, Polemikà, Kas(s)ídis and one more island north-west of Kas(s)idis (= Lachanoù?). Each of these presents its specific ecological identity and species composition, a rather limited, but clearly segmented array of biotopes. Human impact is little. Except for Strongylò: goats and rabbits were released on this tiny once flourishing dot; they transformed it into a barren rockscape (cf. the articles: Skantzoura - satellite islands, and Skantzoura - the living dead).

The entire archipelago is part of the marine conservation area Northern Sporades that was first proposed by the author in 1976.

Regardless the Greek Navy bombarded sections of the coast in military exercises ("Sorry, we did not kow that this is a national park") and the late abbot of the Megisti Lavra helped his brother to exploit the marble in the northern part of Skantzoura - the bulldozer scars are still there. So what does a conservation status mean in the first, second or any other place... 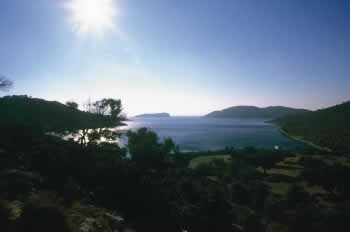 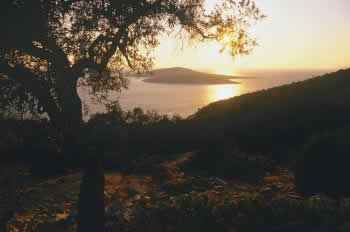