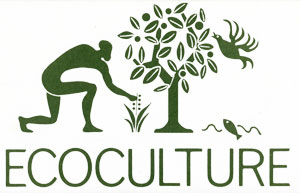 in their conservation efforts.

ECOCULTURE was founded by Thomas Schultze-Westrum as an inter-commission task force of the International Union for Conservation of Nature (IUCN) in 1981. This movement originated from an earlier working group, Conservation and Traditional Life Styles, set up by the same initiator in the IUCN Commission on Ecology.

The following introduction is quoted from the ECOCULTURE leaflet (designed by Keith Pointing; text by Clare Richards and Thomas Schultze-Westrum).

"The sucessful and sustained coexistence between human societies and their natural environment has always depended upon a viable relationship between population, landuse and conservation. As a result of his ability to adapt to particular environmental conditions, man has evolved over the centuries the means with which to protect the ecological systems whose functions ensure his survival. Yet this relationship between human populations and the earth's limited and vulnerable resources is both complex and delicately balanced, and if it is to continue to be mutually sustaining in a modern developing world, every attempt must be made to understand the complexity of this all-important alliance and thereby ensure that the balance is maintained in the future. The term "ecoculture! encompasses not only this material relationship, but also the powerful spiritual and emotional bond which exists between man and his natural surroundings. This collective response to the natural world has contributed greatly to the diversity and richness of traditional cultures worldwide.

Throughout the world, particularly the developing world, this vital bond is being seriously threatened. As a result of over-population, urban growth and technological change, human societies are rapidly losing their original spiritual dimensions, self-reliance and wisdom. While the world around them strives for scientific and economic development, many small indigenous groups, for example, are unwittingly drawn into the social and political vacuum that economic growth inevitably creates. Such a group gradually ceases to have a say in decisions affecting its future and it soon finds its traditional way of life threatened by a body of people that lives and works outside its squere of experience and understanding.

Conservation and development polities frequently overlook this problem. All too often they follow a uniform approach based on Western or urban values, with inadequate regard for the traditional lifestyles of those rural communities which will be most directly affected. They are often insensitive to the worth and significance of the rural traditions which have supported civilizations for thousands of years. Traditional systems have much to recomment them, for they are generally based on common sense, are cost-effective and fit in with the needs and wishes of many local communities. ECOCULTURE recognises that the manmade landscapes of the rural environment are invaluable, both in terms of ecology and nature conservation. It also believes that the wealth of experience and skills acquired by rural indigenous gropus over the centuries should be built upon rather than ignored, for they offer the means of establishing sustainable development and conservation policies for the future which are allied, rather than alien to traditional practices and values.

1, To help maintain the essential material and spiritual bond between human populations and their natural environment and in so doing promote the protection of local resources, landscapes and wildlife.

2, To help provide the means for rural populations to play a primary role in all stages of development and conservation in the area that they identify with, so that they can benefit directly from such development in a way that is consistent with their traditional values, practices and general way of life.

3, To encourage the passing on of traditional skills and the acquisition of new skills in order to develop both efficient and ecologically sound practices in landuse, through the careful integration of traditional and modern methods.

4, To identify areas of priority and promote at the village level conservation policies and projects (undertakings) that will make full use of traditional knowledge and experience, in order to provide a secure basis for future development.

5, To encourage, through the careful classification of suitable examples, a greater understanding of the value and importance of traditional lifestyles and landuse in a rapidly developing world, and to promote research in this field.

ECOCULTURE: A strategy for survival,

1, To generally increase the consideration of social and cultural factors in the planning of conservation programmes.

2, To promote research into the traditional relationship between ecosystems, human populations and their landuse methods, and its application in future landuse policies.

3, To enlarge the potential for conservation by encouraging local communities to protect theirown natural environment and particularly the rare species and threatened lasndscapes within it.

4, To help maintain the cultural diversity of rural communities and explore how this can best be integrated into future conservation legislation, such as the establishment of national parks.

5, To develop ways in which economic factors in conservation projects (undertakings) can be of direct advantage to village people to increase public awareness of the value of traditional lifestyles in conservation and development."

ECOCULTURE was planning to publish a book in 1983. Authorities on conservation and associated subjects from all over the world were preparing chapters under the following headings: The Theory of Ecoculture, Traditional Ecoculture and Alternative Conservation Strategies. Sadly, IUCN never was prepared to allocate sufficient funding for covering the printing costs. Apparently the subject remained of only marginal concern.